This past week, I’ve had a chance to meet a couple of new neighbors! I discovered a Great Horned Owl nest in one of my favorite local parks less than a mile from my home. What’s particularly unusual about this nest isn’t that it’s in this park, or that Great Horned Owls have occupied it, but that one of the two owlets is still in the nest on May 1! The other nest I’ve been following this year was evacuated in late March. 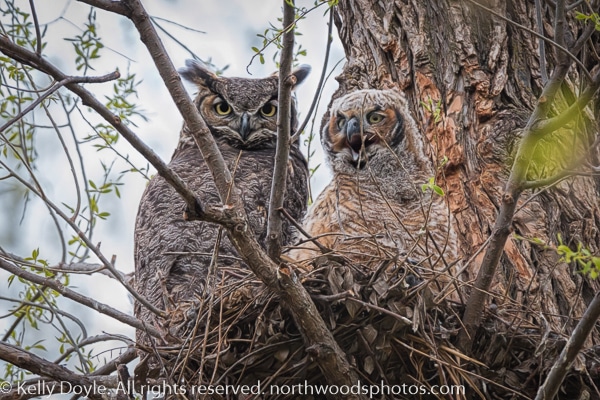 Great Horned Owl Mom with Owlet still in the nest

This nest has gotten some outside attention. Someone claiming to be from National Geographic was supposedly filming some video a few days ago according to a fellow park user. And I was contacted by the Raptor Center at the University of Minnesota who apparently have an orphan that they are hoping to find a foster family for, but the owlets need to be the same age for that to work. I’ve forwarded a few high res pics to them and also provided some info about the sibling that has already branched to see if this family would be a good fit. Haven’t heard a definitive answer yet. Keep your fingers crossed that the orphan finds an owl family! 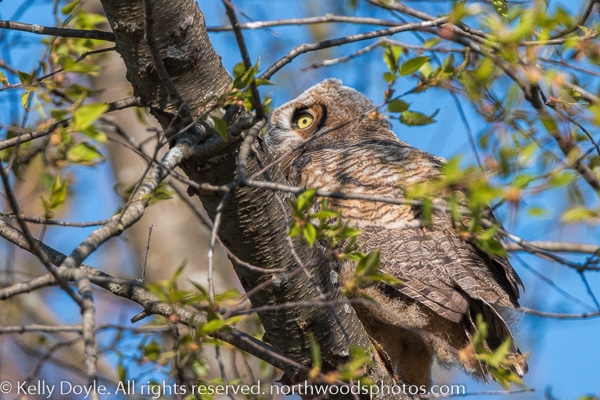 Owls typically don’t build their own nests, but prefer to commandeer someone else’s or find tree cavities to nest in. Once the young birds leave the nest, they will stay with their parents over the summer while they learn to fly and hunt on their own. The Raptor Center has some general Great Horned Owl info about these beautiful birds. I’m looking forward to spending more time with my new neighbors this spring and summer 🙂