I’ve been shooting quite a bit lately, but haven’t had much to show for the time and effort that goes in to getting stellar photos of wildlife or nature. Here are a few of the challenges of outdoor photography that I’ve been experiencing first hand lately:

Sometimes weather IS the shot and other times it makes or breaks the shot. A few weeks ago, the forecast was for clear skies on a Friday night when the moon would not be out. Perfect for astrophotography! One of the challenges of shooting the starry skies or the aurora borealis is that you need the sky to be dark. Really dark. That means driving at least 90 minutes to get away from light pollution of the big city (the best locations are a 5 hour drive for me). So, I headed over to Crex Meadows Wildlife Area near Grantsburg, WI and waited for night to come. I spent the day trying to capture some of the local wildlife and ended up seeing some cool critters, but they weren’t close enough to get any photos good enough to go in the gallery. As I waited for night to fall, clouds started rolling in and the mosquitoes started coming out. In droves. I did manage to get a shot of the International Space Station going overhead shortly after 11 pm, but what I really went there for was to get the Milky Way over Phantom Lake. No such luck. So, a 12 hour day and a tank of gas ended up with nothing to show for it. 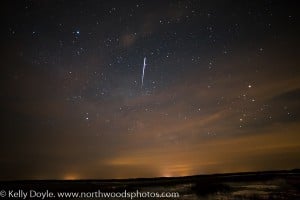 I’ve already mentioned that I frequently see wildlife, but it’s too far away to get a shot worth keeping (and I’ve got a 600 mm lens, which on a crop sensor makes it more like 960). Sometimes, the critters don’t show up at all! Last weekend, I specifically went to an area an hour away to see Red-Headed Woodpeckers. They are not common in these parts and I’d never even seen one much less photographed them. I’d gotten a tip that this specific area was a known nesting site and many had been seen – even close to the only hiking trail open to the public. Went out, got eaten alive by bugs, and never saw a single woodpecker (of any variety). Plenty of Red Winged Blackbirds, but they are everywhere around here and not what I was after. After several hours and a half tank of gas, not a single shot to show for it.

Outdoor photography is not my full time job (I’m a self employed Personal Trainer), so I have to work around my “real job” to get out and shoot. That means passing up prime opportunities when they arise because of other obligations. That’s the main reason I missed the spectacular show of Northern Lights early last week – I simply didn’t have enough time to get out to a suitable (very dark) location, hope and wait for the lights to come out, and get back home in time to see my early morning personal training clients. Missed opportunity.

This past weekend, I was at a state park in Wisconsin that is popular with tourists because of its many small waterfalls. I had my tripod set up and was shooting 30 second exposures to get the nice “silky water” effect. A guy came up and started shooting his own photos with a point and shoot and was using flash. I mentioned that I was shooting long shots and would he mind waiting to get his shots as soon as my 30 seconds were up since his flash was ruining my shot. Sure, no problem. But then he did it again. Not once. Not twice. But three more times. So, I went to one of the other waterfalls in the park. Now there’s someone sitting in the middle of the waterfall. I waited 15 minutes – she never left during that time. Tried another waterfall – a group of people swimming. Back to the previous waterfall – now someone else is sitting in the middle of it. I finally gave up. It’s a three hour drive from home and a beautiful park – not sure if I’ll go back during the off season to try to get photos of waterfalls without people I don’t know in them.

Some times there are really cool things to see, but you can’t get access to the spot you really need to get the shot. Many are wildlife refuges that are closed during breeding or nesting season, or are parks that close after sunset so you can’t get any night shots. Even the state parks are closed to anyone who isn’t a registered camper after 10 or 11 pm (depending on which state). This past weekend, I was able to get an awesome campsite at a state park in northern Wisconsin, so I was able to be out on location between 2 – 3:30 am. I was lucky – getting a campsite at the last minute in the summertime on a weekend is almost impossible in these parts – and you don’t know if you’ll get one until you get there.

I’ve got a lens that I use only for astrophotography. It’s dirt cheap and tack sharp. But it also seems to collect condensation on the glass more so that any other lens I’ve ever used. Not a good thing when you’re out at 3 am trying to get the Milky Way or Northern Lights since those shots are so difficult to capture anyway. I’ve had to cut a few night sessions short because of this problem. Looks like I’ll have to spend another $2000 for a better lens. Did I mention that this gig is spendy?

I was out shooting the Milky Way at Pattison State Park near Superior, Wisconsin early Saturday morning. This time of year there is a very short window for night sky shooting because the days are the longest and the nights are very short. Every minute can count. I’m not sure how many 30 second shots got ruined because a car would drive by and their head lights would mess things up. But even critters get in on the fun sometimes. Here’s a shot of a firefly buzzing around while I was shooting the Milky Way by Interfalls Lake.

These are just a few of the challenges of outdoor photography! Makes you appreciate the good photos even more when you learn what goes in to getting them 🙂 Take a look around in the gallery and just imagine what I went through to get that shot.