I went to a new for me state park in Wisconsin a couple weeks ago: Pattison State Park just south of Superior, WI – with my primary goal being to capture some new landscape photography for the gallery. I was especially hoping to get photos of the Milky Way and I had a short window of opportunity with the moon set happening just before 2 am. The weather forecast was for clear skies on Friday night, with increasing clouds on Saturday and a stormy Sunday.

Pattison is host to Wisconsin’s largest waterfall and also has a beautiful lake with a nice sand swimming beach. It’s close to Amnicon Falls State Park, which has several scenic smaller waterfalls (many with people who like to sit in the middle of them on a warm summer day). Anyway, I haven’t had time to process all of the photos I took over the weekend, so you’ll have to wait to see what I came up with.

This post is just about a little project that I decided to try: take a photo from the exact same location at different times of the day to see how different it can look as the light changes. I found a delightful little spot just a few yards from my campsite on the east side of Interfalls Lake.

Here is the first shot I took at about 8:30 pm, which is about half an hour before sunset: 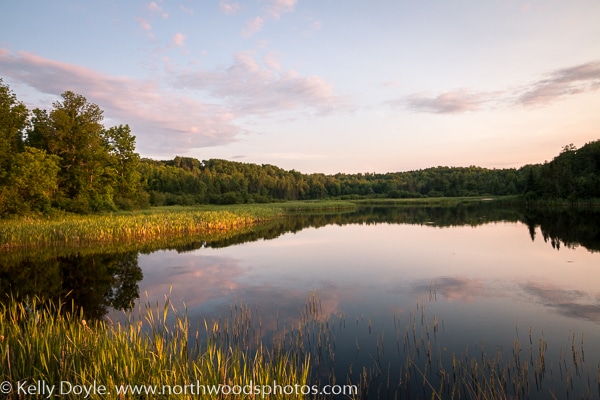 I set my alarm for 1:45 am to get on location just after the moon set so that I could get as many different angles of the Milky Way as possible. Long days mean short nights, and astronomical twilight happens awfully early in late June. You want the sky as dark as possible, so timing is critical. The bull frogs were making their weird little noise and there was a light fog hovering over the lake, which doesn’t really show up in the photos. No bugs at all, which made it a magical night to be standing under the stars.

The humidity was causing my lens to collect condensation, which was giving me some trouble after about 30 minutes of shooting. Had to pack it in after that and managed to get a couple hours of sleep before the birds started chirping. By 6:30 am the loons were calling out on the lake and it was already well after sunrise: 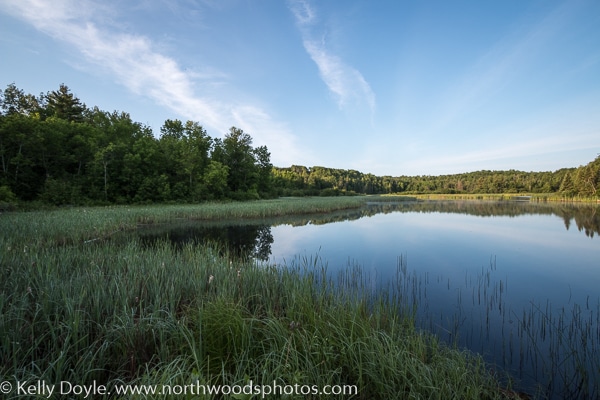 These photos all look very different, even though they were taken from the exact same spot within a 24 hour period during the summer. You can imagine the autumn colors, the frozen lake and trees covered in snow with stark black and white landscape, then the first tree buds and flowers of spring if I could access this spot throughout the year.

What are your favorite landscape photography projects?