I was one of the race photographers for the Superior Fall Trail Races again this year. With distances of marathon, 50 miles and 100 miles – all on the rugged Superior Hiking Trail in northeastern Minnesota – it means I’m usually pulling an all-nighter to shoot the races. This year, we were blessed with perfect weather, clear skies, and an appearance by the Aurora Borealis dancing over the 100 mile runner’s heads. 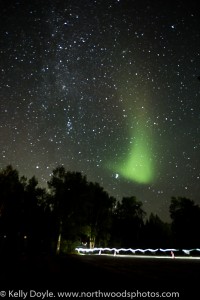 Running under the Northern Lights

I managed to sneak away from the race for a bit and caught the Big Dipper reflecting in a perfectly calm lake – even caught a shooting star going right through the Big Dipper! 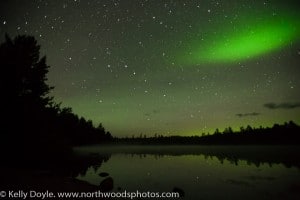 After the 50 mile race started the next morning in pre-dawn dark, I snuck away to Tettegouche State Park to watch the sunrise over Lake Superior while I had breakfast on the beach. 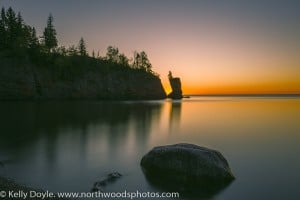 Then it was back to the races again for the rest of the day! Lugged two cameras, a tripod and a backpack up the Caribou River gorge to get the 50 mile runners as they passed right next to a small waterfall. Unfortunately, I forgot to bring the flash for the camera and the light was tricky, so I apologize for the quality of that set of photos 🙁

50 Milers running alongside the Caribou River

After Caribou, I hiked from the Sawbill aid station in to the bottom of the very steep and rocky Carlton Peak, where the marathoners had already gone through but the 50 and 100 milers were still navigating their way to the finish less than 20 miles away. All of my race photos have been posted on the North Woods Photos Facebook page if you’re interested in looking at them. There are a few bonus photos for my Facebook fans as well 😉

I’ve had a couple of inquiries from runners of both this race and the Afton Trail Races if they could purchase copies of photos I took of them running, or the Milky Way photo from last year as well as the Aurora shot from this year. The answer is Yes! Just let me know which ones so I can upload them to the online gallery. I won’t be keeping the individual runner photos for more than a few months after the event, so get them NOW if you want them! I just don’t have the space on my hard drive to keep photos that most people aren’t interested in purchasing after the race has come and gone. You are welcome to download and use the low resolution photos that have been uploaded to Facebook for your personal use for free – just be sure to give me photo credit (a link to this website would be greatly appreciated, too). 🙂

In addition, I’m offering 20% off anything you buy until October 31, 2015 with promo code SUPERIOR2015, so this would be a great time to treat yourself to a photo of your race, or even do a little holiday gift shopping and check out all of the other galleries 😉