Winter this year was a bust here in the North Woods, but now it’s mid-March and we’ve gotten off to an early start with spring migration! 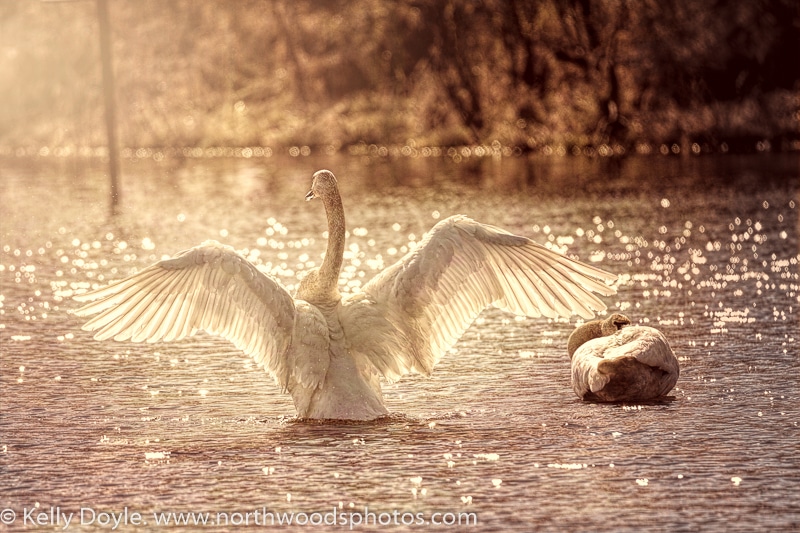 Many Trumpeter Swans are back, along with Mallard Ducks and Canada Geese. But one of the best parts of spring for an Outdoor Photographer is getting to see birds that migrate through this area on the way to their summer nesting grounds. They don’t stick around these parts, so catching a glimpse of the various species that are just “passing through” is a thrill! Flocks of hundreds of Tundra Swans have been flying overhead, along with Ring Billed Gulls, Sandhill Cranes, and several species of waterfowl.

I’ve seen a few Hooded Mergansers on the local ponds 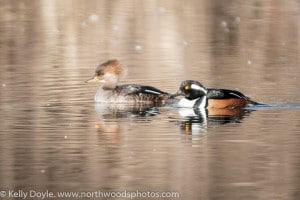 as well as some Ring-Necked Ducks. 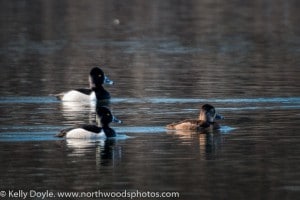 I’ve only spotted one American Coot so far and am still waiting to see (and hear) Common Loons, Northern Shovelers, Teals, Osprey, and a bunch more that I’m forgetting at the moment. The local lakes have already iced-out here in the Twin Cities, so the spring migration is happening faster and earlier than usual this year.

Some of my favorite spots for watching are near the rivers: Mississippi, Minnesota, and St. Croix. The Three Rivers Parks are also great for seeing wildlife in the metro area. We’ve got some amazing wildlife refuge areas, including the Minnesota Valley National Wildlife Refuge right in the Twin Cities. The Bass Ponds area is a local hot-spot for spring migration and we even get lots of visitors on the Chain of Lakes right in Minneapolis.

What migrating birds have you seen in your neck of the woods so far this year?

My favorite song bird in Minnesota is a year long resident! The Northern Cardinal (Cardinalis cardinalis) does not migrate and stays within a few kilometers of it’s birthplace for life. Even during sub-zero winter months, these guys and gals can be found hanging around bird feeders (they especially like sunflower seeds), thick bushes, or woodland edges.

The bright red males are striking at any time of year, but even more so during the winter when the entire North Woods landscape is essentially black and white (with some drab browns thrown in for good measure). Males are bright red overall with a black mask and throat, a red crest, and a large thick red bill.

Females are mostly brown with dull red wings and tail and a reddish crest. They have a black mask and throat and large thick red bill similar to the males. Both genders measure 8.5-9 inches long and have a 10-12 inch wingspan.

Northern Cardinals are one of the few species of North American songbirds where the females sing, even while she’s sitting on the nest! It is thought that this may give her mate information about when to bring food to the nest. Mated pairs share song phrases with the female song being slightly longer and more complex. Check out some calls and songs here.

Speaking of the nest, the female Northern Cardinal builds an open cup-like nest 3-10 feet off the ground well hidden in dense shrubs or vines. The nest is built with twigs, bark strips, weeds or grass, leaves, and pine needles. It measures about 4 inches across (inner diameter of 3 inches, and 2-3 inches tall. The nest can take anywhere from a few days to more than a week to build. They typically lay 3-4 eggs which are incubated by the female for about two weeks. Both parents feed the nestlings – usually insects. The young will leave the nest approximately 9-11 days after hatching. The mated pair may then have another brood or two during the warm summer season.

The Northern Cardinal diet consists mostly of seeds, berries, and insects. They seem to be particularly fond of sunflower seeds when visiting feeders, but will eat other seeds as well.

Northern Cardinals are typically seen in pairs during the warmer breeding season, but will form larger flocks during the winter. Mated pairs may stay together through the winter, but some pairs will split up before the next breeding season. Their populations are stable and they seem to be thriving in their current range 🙂

What is your favorite song bird? Does it stay in your area all year, or does it migrate?

If you’d like to see more images of Northern Cardinals, check out the Wildlife Gallery to view or purchase.